Koh Samui – Island in the Sun!

Koh Samui is an island off the east coast of the Kra Isthmus in Thailand, close to the mainland Surat Thani town. It is Thailand’s third largest island, with an area of 228.7 km.
The most popular and commercialized beaches of Koh Samui are Chaweng Beach and Lamai, while the northern beaches and their adjacent villages of Mae Nam, Bop Phut, Bang Ruk (Big Buddha) and Choeng Mon are more peaceful choices, and the west coast beaches are still (comparatively) quiet.

Samui is an island of great natural beauty and variety, Samui is home to about 40,000 full-time inhabitants, 90% of whom are Buddhist. The palm fringed shoreline and coconut and fruit cultivation of the coastal lowlands rise to a central granite massive, the slopes of which are cloaked in virgin rain forest.

The History of Koh Samui 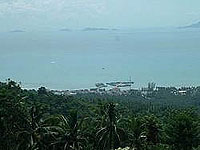 The island was probably first inhabited about 15 centuries ago, settled by fishermen from Malay Peninsula and Southern China. It appears on Ming Dynasty maps dating back to 1687, under the name Pulo Cornam. The name Samui is mysterious in itself. Perhaps it is an extension of the name of one of the native trees, mui, or it is a corruption of the Chinese word Saboey, meaning “safe haven”.

Until the late 20th century, Samui was an isolated self-sufficient community, having little connection with the mainland of Thailand. Koh Samui was even without roads until the early 1970s, and the 15km journey from one side of the island to the other involved a whole-day trek through the mountainous central jungles.

Today, Koh Samui has a population of about forty-five thousand, and lives on a successful tourist industry, as well as exports of coconut and rubber. It even has its own international airport, Samui Airport, with flights daily to Bangkok and other major airports in Southeast Asia. While the island presents an unspoiled image to the public perception, economic growth has brought not only prosperity, but changes to the island’s environment and culture, a source of conflict between local residents and migrants from other parts of Thailand and other countries. Reflecting Koh Samui’s growth as a tourist destination, the Cunard ship MS Queen Victoria (a 2000-plus passenger ship) will dock at Samui during its 2008 world cruise.

Lipa Noi Beach Samui is located in the Gulf of Thailand, about 35km northeast of Surat Thani town (9?N, 100?E). It is surrounded by about sixty other islands, most of which comprise the Angthong Marine Park, but also include other tourist destinations Koh Phangan, Koh Tao and Ko Nang Yuan.

The island is roughly circular in shape, and is about 15km across. The central part of the island is an (almost) uninhabitable mountain jungle (peak Khao Pom, 635m) and the various lowland areas are connected together by a single road, that covers the circumference of the island.

The old capital is Nathon, on the southwest coast of the island, and remains the major port for fishing and inter-island transportation. Nathon is the seat of the regional government, and the true commercial hub of the Samui locals. It has a charming pace, and is almost small enough to walk everywhere. The old Chinese shop houses along the middle street whisper of an exotic history.

Each of Samui’s primary beaches is now also nominally considered a town, due to the number of hotels, restaurants and bars that have sprung up in recent years.

The Economy of Koh Samui Historically the island’s economy has been based around subsistence agriculture and fishing, with coconuts as the main cash crop. From the 1980s onwards however, tourism has become an economic factor and is now the dominant industry. The construction of a stable, high-speed internet connection in recent years has also made the island a practicable location for IT-based enterprises, which are beginning to provide a certain degree of economic diversity. The island’s climate and accessibility make it particularly attractive for international investors.

Find more Information about our sailing company and our location and surroundings here: About Sailing Thailand.
If you would like more details about the island Koh Phangan, sailing courses or sailing Thailand, please don’t hesitate to contact us here.