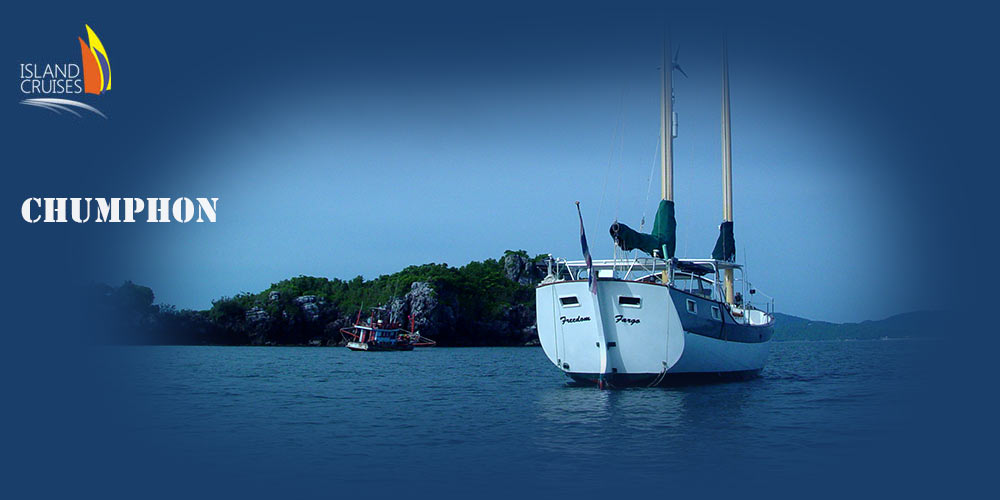 Chumphon (sometimes rendered as “Chumphon” or “Chumpon” or “Chumporn”) Province is a relatively quiet, low-key tourist destination, roughly halfway between Bangkok and the border with Malaysia. For many Tourists, it’s little more than a point of passage to the fabled Gulf of Thailand islands, especially Koh Tao. However, Chumphon Province boasts beautiful beaches, excellent scuba diving, and exceptional natural amenities.

There are several national parks nearby where jungle treks or motorcycle tours to waterfalls and caves can easily be arranged, with guides or independently. One of the national parks though, can only be reached by boat. Island Cruises offers sailing cruises and liveaboard sailing to the Angthong Marine Park. As an outpost of Thai kingdoms dating back to the Ayutthaya period, there are also a few historical sites to visit in Chumphon. Naturally, the seafood is exceptional in a fishermen town like Chumphon. In general, once you’re away from the backpacker central, which by itself is very minimized in Chumphon, consisting mainly of two bars, the Farang bar and Fame, Chumphon Province offers a  modest but very pleasant and cost-effective alternative to the oversold resorts on the islands.

Chumphon is one of the southern provinces of Thailand, at the shore of the Gulf of Thailand. Neighboring provinces are Prachuap Khiri Khan, Surat Thani and Ranong. To the west it also borders Myanmar. Chumphon town is capital of the Chumphon Province and the Mueang Chumphon district. The city is located about 463 kilometers away from Bangkok. As of 2005 it has a population of 33,522. The town covers the commune (tambon) Tha Taphao completely and parts of Bang Mak, Wang Phai, Na Thung, Tak Daet and Khun Krathing.
The main economic sector of Chumphon is agriculture.

Prince Chumphon was one of the King Rama V’s sons. Being the founder of the modern Navy of Thailand, the Prince was proclaimed as “the Father of Thai Navy”. He was respected by the navy, fishermen, and other people. His picture has been established in most of the houses in Chumphon.
In November 1989 the typhoon Gay hit the province hard – 529 people were killed, 160,000 became homeless, 7,130 km² of farm land was destroyed. Gay is the only tropical storm on record which reached Thailand with typhoon wind strength.

Chumphon is located on the Isthmus of Kra, the narrow land bridge connecting the Malay Peninsula with the mainland of Thailand. To the west are the hills of the Phuket mountain range and its northern continuation, the Tenasserim chain, while the east is the more flat land at the coat to the Gulf of Thailand. The main river is the Lang Suan, which originates in Phato district.
Chumphon is subdivided into 8 districts (Amphoe). These are further subdivided into 70 communes (tambon) and 674 villages (muban). Chumphon and Lang Suan are the two towns (thesaban mueang), there are further 12 townships (thesaban tambon).

The provincial seal shows an angel, which gives blessing to the people. It is placed between two Cluster Fig trees (Ficus racemosa), which is also the provincial tree. The provincial flower is the Indian shot (Canna indica), and the finger banana is another provincial symbol of Chumphon.

Find more Information about Thailand and our location and surroundings here: About Sailing Thailand.
If you would like more information about Island Cruises, or you have a question about chartering a sailing yacht in Thailand, please contact us here.