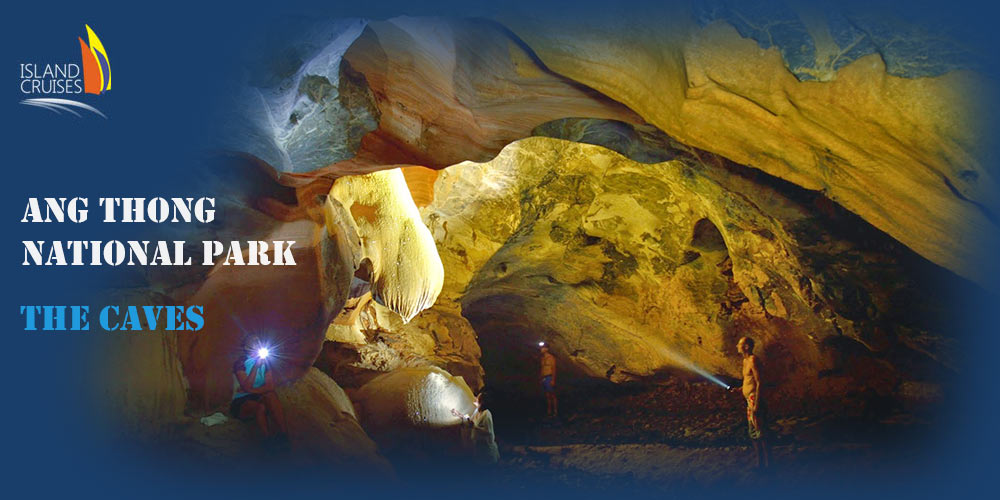 Summertime is coming, and with it the possibility to visit one of the most outstanding attractions you can visit on our sailing cruises to the Ang Thong National Park. Caving always has been a part of our Island Cruises Ang Thong Tours, since  the caves are some of the most spectacular features of the national park. But this cave is by far the most interesting one to be found there. Due to only providing save access during a certain period of the year and the fact, that there is a certain degree of physical fitness required to do so, it is not on the schedule of any of the day cruise companies flooding the Ang Thong National Park with tourists. However, the only challenge is entering the cave. The entrance is well hidden, which is not difficult because it is just wide enough for one person to get in or out at a time. It leads through a vertical chimney of only approximately 2 meters in length. So even people with claustrophobic tendencies can overcome this obstacle, since inside, the cave is opening up to the size of a subway tunnel in average.

Have a look at the video below to get an impression of the cave before I will go into detail about the features to be seen there and how they developed over thousands of years:

The Ang Thong National Park is a karst landscape. These are formed by the dissolution of soluble rock, in our case limestone. The main feature of a karst topography is underground drainage systems, sinkholes and… Caves! More specific, it is a cone karst and tower karst landscape, reminiscent to the better known Phang Nga Bay, on the west coast of Thailand, and the Halong Bay in Vietnam. Cone karst is only occurring in the tropics, since an all year round wet or dry wet climate is necessary to provide the circumstances for the intense weathering needed to form this type of karst. Another prerequisite is very pure limestone, a sedimentary rock usually developing under water comprised of the shells of marine organisms, coral skeletons and molluscs. For millions of years the whole area was flooded resulting in thick layers of limestone sediment. These horizontal layers of limestone were pushed up and folded by tectonic movement (movements of the Earth’s continental crust).

Speleothems are secondary mineral deposits formed in a cave. Rain passes through the soil zone and becomes slightly acidic by reacting with the soil CO2. Then it washes out calcite when passing through cracks and crevices of the soluble bedrock. The calcite deposits in various forms as the enriched water precipitates in the cave.

When the mineral laden water arrives at and edge and if this edge is the ceiling of a cave it drips down. Being exposed to the air, the chemical process which created it is reversed and tiny particles of calcium carbonate are deposited. Stalactites start with one drop of mineral laden water forming a very thin ring of calcite where that drop was falling off the ceiling of the cave. After a while a thin tube with a diameter of 4 to 5 mm develops. These fragile tubes are called “soda straws”. If these tubes are clogged, water starts flowing on the outside of the soda straw, building up the more well known cone shaped stalactites. After a prolonged period of dry weather during which the stalactite didn’t grow any more the process can restart, building up soda straws at the tip of a stalactite like shown in the picture above.

The same mineral saturated water dripping down from the tips of stalactites or the ceiling of the cave is eventually forming rounded or cone shaped structures on the floor.  These are never hollow like the soda straws but solid structures. If they build up underneath a stalactite they can grow together forming pillars, called columns.

When water flows over walls and the floor of a cave it builds flowstone. Flowstone are sheet like deposits out of calcite or other carbonate materials. In our caves in the Ang Thong National Park these sheets are usually sparkling a lot, giving the scenery a fairy tale glow. Lesser known to the public than stalagmites and stalactites, flowstone is actually the most abundant speleothem in limestone caves.

Another common feature of limestone caves are rimstone dams and pools. In our cave here in Ang Thong, it is the dominating feature, since, at times it must have resembled a freshwater underground stream. Still much of this cave is comprised of water pools, some of then so deep that you have to swim to continue the cave exploration.

Rimstone dams, also called gours, in limestone caves are calcite deposits built up when water flows over the edge of a pool. The turbulence when the water floats over the edge likely let is gas out the carbon dioxide causing the calcite particles building up the dam. Above and below the rimstone dam micro gours are often found.

What really makes this cave more special than the others in the Ang Thong National Park is the high percentage of sandstone in between the grey and black limestone. While already the black limestone with its white bands of calcite deposits is very beautiful, it can be seen in many other caves and above ground in the national park. This uniqueness is made possible, because this cave is an erosional one, which can develop in any kind of rock, even granite. This means that there was (and is) a stream of water which washed out the caverns instead of only being based on acidic water slowly dissolving the limestone.

How can I get there?

Visiting this cave is only possible from about the end of May to roughly mid October. Since the island where the cave is located in the Ang Thong National Park is the furthest away from Koh Tao you need to book at least a 4 Day Ang Thong Tour or a longer yacht charter with Freedom Fargo to have the possibility to add this attraction to the itinerary. And of course, it’s not for the faint-hearted. We have a set of modern LED head lamps for our guests and the difficulty of entering and moving through the cave is moderate. But it really is an adventure. The decision to go is yours and the responsibility as well.